The negotiating process – Negotiations on Serbia’s accession to the EU have officially started at the First Intergovernmental Conference on January 21, 2014. The Ministry of Defence of the Republic of Serbia is actively involved in the negotiation process through the participation in negotiating groups for 20 negotiation Chapters

Designated representatives of the Ministry of Defence and the Serbian Armed Forces participate in respective negotiating groups` meetings (meetings for explanatory and bilateral screening) - providing an analytic overview and evaluation of the level of alignment of national rules and regulations with the acquis communautaire. Screenings for all the negotiating chapters with the EU were completed in March 2015.

Meeting recommendations of the European Commission – In the latest European Commission Progress Report for Serbia, published in November 2016,  it is noted that the Ministry of Defence is moderately prepared in foreign, security and defence policy (Chapter 31: Foreign, security and defence policy), which for the Ministry of Defence chiefly regards the continued participation in EU crisis management missions an operations.

The Government of the Republic of Serbia adopted the Revised National Programme for the adoption of the EU acquis communautaire (NPAA) in August 2014. The timeline for its implementation is year 2018, when it is envisagned that the Republic of Serbia will achieve its full internal readiness for EU membership. Given that the EU acquis is constantly evolving, the NPAA will periodically be reviewed and adapted to future changes of EU law. The Serbian Government has tasked the European Integration Office to submit regular reports on the implementation of the NPAA. The Ministry of Defence prepares contributions within its area of competences pertaining to the security sector reform and the Common Security and Defence Policy.

The Ministry of Defence of the Republic of Serbia has been actively involved in the implementation of the Stabilisation and Association Agreement (SAA), signed in April 2008 and entered into force in September 2013. It is envisaged that representatives of the Serbian Ministry of Defence participate in three out of seven Subcommittees of the Stabilisation and Association Agreement Committees, as follows: 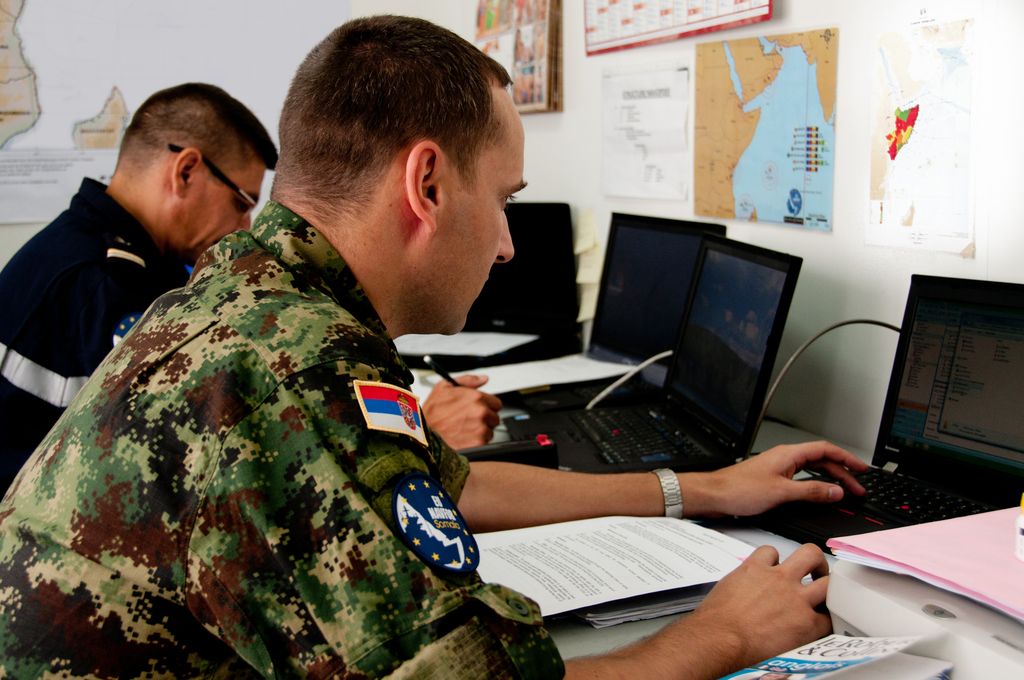 The established legal framework since 2012 has allowed for the participation of representatives of the MoD and SAF in defence ministerial meetings, meetings of the EU Military Committee (open for NATO members that are non-EU member states and for EU candidate countries), and i EU crisis management operations.

The deployments of members of the Ministry of Defence and SAF in EU-mandated crisis management operations ensure a favourable influence on the Republic of Serbia`s EU integration process overall. Since 2012, representatives of the SAF have been engaged in the European Union Naval Force Operation - Atalanta (EUNAVFOR ATALANTA), in the military mission set up with a view to strengthening the military forces in Somalia - European Union Training Mission in Somalia (EUTM Somalia), as well as in the EUFOR RCA military operation and the EUMAM RCA military advisory mission and training mission EUTM RCA in the Central African Republic, and in the EUTM Mali training mission established for the purposes of training the military and security forces of Mali.

The Handbook for Decision Makers in the field of Common Security and Defence Policy may be found on here.
Cooperation with the European Defence Agency Through its participation in various initiatives and programmes of the European Defence Agency, the Republic of Serbia intends to develop capabilities, engance its interoperability with EU member states, improve defence industy and research potentials of domestic institutes, and to achieve the tehnological modernisation of the Serbian Armed Forces.

Since the establishment of cooperation in 2013, the Ministry of Defence had the opportunity to host both the previous Chief Executive of the EDA Claude-France Arnold in November 2014, as well as the newly appointed EDA Chief Executive Ambassador Jorge Domecq in December 2016.

The intention expressed by the Serbian side regarding the participation of the SAF in HELBROC battle group with the Hellenic Republic as the lead nation starting from 2020 was well received by all the member states of this battle group, and they all responded positively to such engagement.

Expert nagotiations with all the states participating in this battle group are currently in progress with a view of identifying the level of engagement of the Serbian Armed Forces personnel in HELBROC battle group and harmonisation of all required documents preceding the said engagement.

For the purpose of the European Union Force Catalogue, the Republic of Serbia has declared the Serbian Armed Forces units that were also declared within the Planning and Review Process under the NATO Partnership for Peace Programme (a motorised infantry company, a military police platoon, a CBRN platoon and two medical teams), as well as an autonomous vessel protection detachment.
The priorities of cooperation with the EU
Priorities of cooperation of the Ministry of Defence and the Armed Forces of Serbia with the European Union in the following period are:
• continuation of the participation in EU crisis management operations,
• participation in European Defence Agency programmes and projects,
- commencement of the engagement in EU battle groups,
• Improvement of administrative capacities for more active cooperation in the scope of Mutual Security and Defence Policy and
• continuation of the participation in negotiating groups during the accession process to the EU
- strengthening the cooperation with the EU through projects in the field of defence.