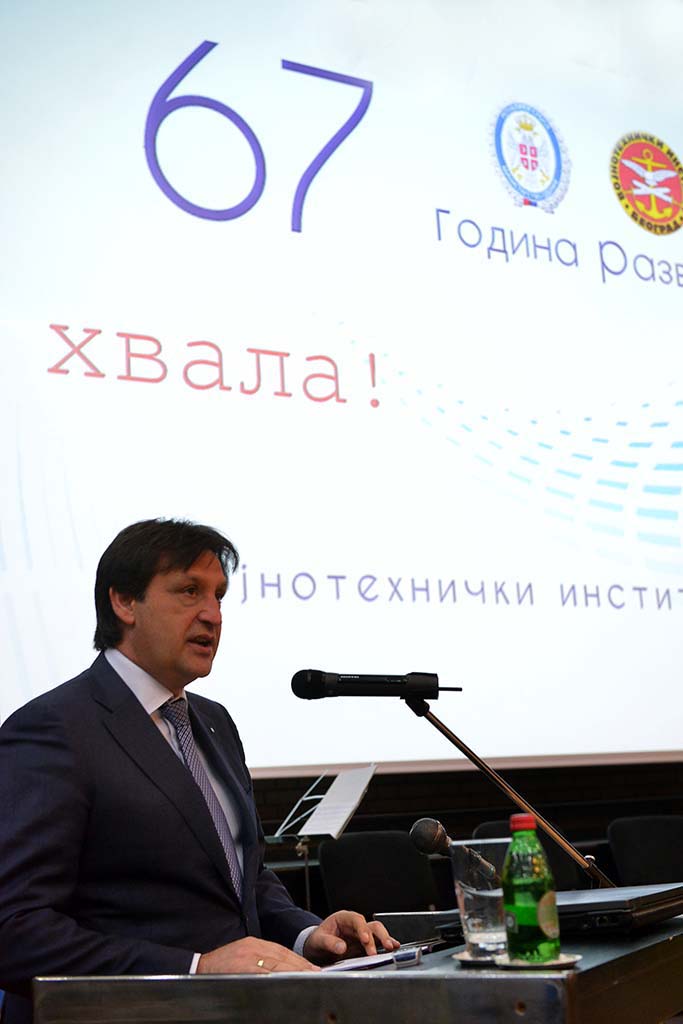 Director of the Military Technical Institute Colonel Dr. Zoran Rajic in his opening address introduced the attendees with the capacity of the Institute and activities of the largest research institution in this part of Europe in the field of defence technologies. He pointed out that the MTI is currently working for the Armed Forces on 24 development tasks, 15 research projects, 4 modernization projects and 66 projects of functional tasks, noting that compared to the previous year the total sum of these tasks is higher.

Colonel Rajic said that the MTI strives each year to submit a greater means of armaments and military equipment (AME) to the Technical Testing Centre for final testing or admission to the AME. Last year it was an aircraft, "Lasta", and this year the missile system "Morava."

Also, as Rajic pointed out, this year the Institute has earned one million euros, which by far has been the MTI members were congratulated on the Day of the Institution by Defence Minister Bratislav Gasic. He said that MTI, working on research and development projects, integrates all scientific, educational and production capacities of the Republic of Serbia, making Serbia recognized in the world of manufacturers of arms and military equipment.

Gasic stressed that the Ministry of Defence this year for research and development tasks of modernization of the Institute has allocated more than 330 million dinars, 40 million dinars to equip laboratories, and for current repairs and maintenance of buildings and facilities of over 70 million dinars. Therefore, he said, it is required that their use is rational, cost-effective and efficient.

The Minister stressed the importance of the revenue that MTI generated agreeing that the Institute can independently dispose of the income for the repair of infrastructure, laboratory equipment and training of employees. - We have witnessed in recent years that some countries in our region are trying to outrun the Serbian Armed Forces with some more modern means. We are not afraid of that. The biggest and best weapons that the SAF has are the employees at MTI, with the help of the SAF and the Ministry of Defence, and I'm sure that, with knowledge, strength and skill we will manage to be the leaders for many years in this part of the Balkans and Europe - Minister of Defence said.

As a sign of recognition for outstanding scientific and technical contribution in the field of research and development of AME, at the ceremony the highest recognitions of MTI were awarded. Plaques "Archimedes" were presented to Prof. dr. Leonid Ivanovich Gretchihin from the National Academy of Aviation of the Republic of Belarus and dr. Zoran Anastasijevic, and letters of thanks for exceptional business cooperation were presented to the Military Quality Control, "Prva Petoletka" JSC Trstenik, "Prvi partizan" JSC Uzice, "Milan Blagojevic" JSC Lucani and "Energotok" LLC Beograd.