The joint tactical demonstration exercise titled "Shield 2015", which included more than 700 members of the Ministry of Interior (MUP), the Serbian Armed Forces and the Security Information Agency, was held today in Belgrade. The exercise was also attended by Serbian Prime Minister Aleksandar Vucic, who was welcomed in front of the Palace of Serbia by Ministers of Defence and Interior, Bratislav Gasic and Nebojsa Stefanovic, Commander of the Gendarmerie and also the commander of the exercise, Colonel Goran Dragovic and Commander of the Special Brigade of the Serbian Armed Forces, Brigadier General Zoran Velickovic. The exercise was attended by President of the Republika Srpska Milorad Dodik, ministers in the Serbian Government, Chief of the General Staff General Ljubisa Dikovic, representatives of the diplomatic corps and citizens.

During a bit over an hour, demanding and complex tactical exercises in resolving the hostage crises on the plane at the Nikola Tesla Airport, in the train at the Main Railway Station, in the Palace of Serbia, and at the occupied facility on the Danube River were displayed. Dozens combat vehicles and helicopters of the Serbian Armed Forces and the MUP were deployed.

After the parade of the units, at a press conference, Prime Minister Aleksandar Vucic congratulated all members of the security forces in Serbia for the excellent demonstration exercise, which, as he said, took place in difficult conditions and with maximum effort.
- I think that the citizens of Serbia could see that our units are extremely well trained, ready, and that these people are working very hard. It is very important that unity has been shown in coordination of our military and police forces and the Security Information Agency and that they were acting as a team. They showed courage and determination - Vucic stressed. 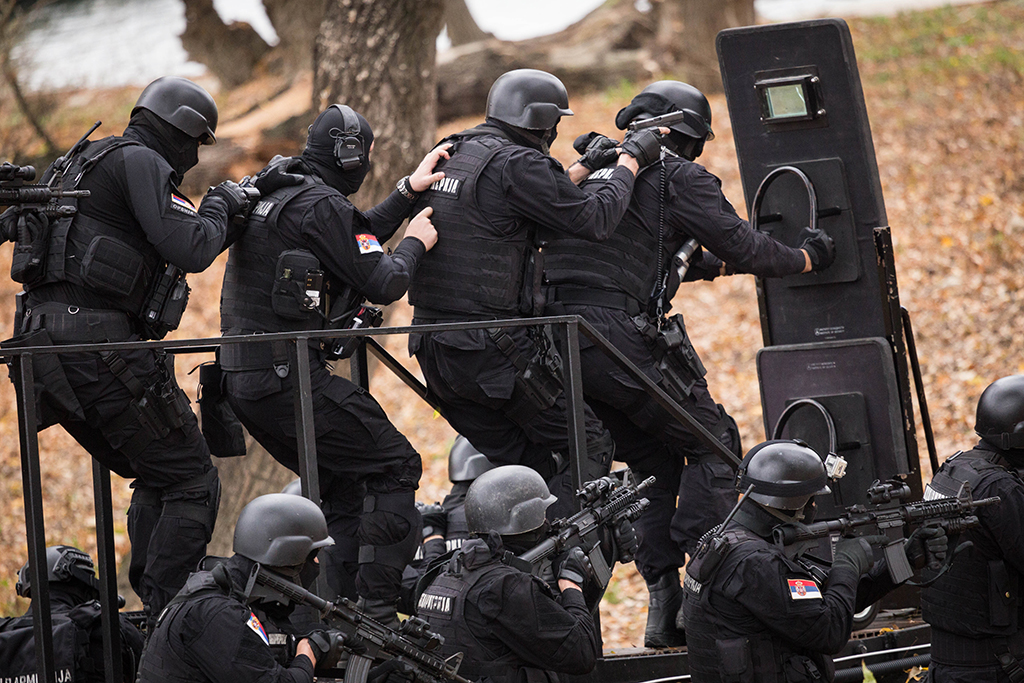 The Prime Minister said that every element of the exercise was carried out brilliantly. "The citizens of Serbia were able to see how quickly we will act. Of course, what is much more important is that we try to preserve our country from any attacks, but since it can never be guaranteed, you never know, and this will be our response. And this means that we will react swiftly, in unison and efficiently," Prime Minister said in addressing the media.
Vucic said that he hopes that in the future we will be able to provide our troops with better equipment and better arms, even though we are not, as he said, weaker than others. He pointed out that a lot of money is invested in the defence industry, which is one of the symbols of our industry, and stressed that yesterday the decision was made to grant 10 million euros through the Serbian Bank to our most important factories - from "Zastava Arms" to "Teleoptic Gyroscope."

President of the Republika Srpska Milorad Dodik said that it is important for the people in the Republika Srpska to see the capability and training of Serbian units for intervention in cases of terrorist acts.
- The present time, time of challenges, is, above all, linked to terrorism in the whole world. The area where we live, Republika Srpska within Bosnia and Herzegovina, seems particularly important. You could even see a terrorist attack a few of days ago and therefore it is very important that our police is able to respond and to cooperate with all security services in the region, and quite naturally we mostly rely on the security services and the industry here in Serbia. Therefore it was very important for us to see here the way Serbia is ready to respond to these tasks - Dodik said.

He added that the Republika Srpska, in equipping the police, will fully rely on the resources and the equipment and arms that are produced in Serbia.

Commander of the exercise Colonel Goran Dragovic thanked the state leadership for being entrusted to command such an exercise.
- Citizens of Serbia must be certain that they have great special units, of both the Ministry of Interior and the Serbian Armed Forces. The complexity of this exercise was in that we showed a synchronized operation and joint action. At no point could it occur that it was uncertain who was doing what. Each of these units practices all the situations you have seen today, and I think that today we have shown that we can work together and that each of these units is assigned a role to play in resolving the crisis - Colonel Dragovic said.

Special Brigade Commander, Brigadier General Zoran Velickovic, confirmed that members of the Serbian Armed Forces, especially of the Special Brigade and special purpose battalion "Cobras" perform such exercises daily. As he said, they had prepared for the exercise "Shield 2015" for a very short time, but pointed out that in the future these tasks will be intensified and practiced even more.

Answering journalists' questions, Prime Minister Aleksandar Vucic emphasized the importance of the defence industry of Serbia, which, as he said, is on the rise. He pointed out that we have turned to making our own arms, to producing as much equipment and ammunition as possible, because in this way our economy and defence capacities of Serbia are strengthened.

Vucic said that the equipment that was displayed at the tactical-technical assembly during the exercise had been made in our factories in the past three years.
- We are investing in the defence industry, and I have always said that we would invest in the defence industry. We have done that and we will do that. We will open some new plants in Uzici near Uzice, and we will further expand the capacity in Velika Plana. I hope that we will open another military factory. This is what we do and it is for the development of our economy. Of course, it will contribute to better and more modern arms, better and more modern weaponry and better and more modern equipment - the Prime Minister said. He added that by the end of January we will get two helicopters from Russia, and two German helicopters by the end of next year.

- We have a small army, a small police; we have a very capable army, a very capable army police and a very capable Security Information Agency. These people have now shown in a remarkable way that Serbia is safe and secure. We will continue to invest in our defence industry, but this will in no way affect the collapse or increase of our fiscal deficit, the endangering of our budget and public finances - Vucic said.